Race is Not Biology, but Biology is Racialized

We think it's confusing too.

A trellis of DNA strands drawn in the style of leaves and branches against a blue brick wall. The trellis imagery represents a more accurate depiction of human genetic diversity in contrast to the classic image of a single genetic family tree with distinct racial branches. Artwork by Alexa Fishman .

Many of our ideas about race are grounded in biological narratives of genetic difference. But what is the real relationship between race and biology?

“Do you know why Asians have slanty eyes?”

It was too late to stop my instinctual eye roll. My brother had a tendency to harbor unpredictably strange and often offensive ideas, but I tried to restrain myself from dismissing him outright (isn’t that what big sisters are for?).

“Because they had to squint all the time to keep the dust out of their eyes while they were working on the rice paddies.”

“Do you even know what rice paddies look like? They’re not dusty – they’re in water!”

Oh, and that’s not how evolution works. Or race for that matter.

But still — I was sympathetic. My brother and I were both multiracial kids in a rural Connecticut town that was 98% White. It was only a few years before that conversation that I went through my own struggle coming to understand what it meant to be a mixed kid in a school where my nickname was ‘the Asian’. When people asked ‘What are you?’ I learned to respond in percentages – 50% Japanese, 25% Lebanese, 25% Scots Irish – fractioning my humanity into consumable, quantifiable chunks.

Because of the homogeneity of the student body at my high school, my ‘Japanese-ness’ dominated the ways that others perceived me, and in turn how I perceived myself. When I got a B on a math test I would joke about being a ‘bad Asian’. I strayed from my initial love of English and history to the sciences where I felt I ‘belonged’. I took my good grades and sharp memory less as individual talents, and more as inherent advantages of my race. The unspoken thread through all these stereotypes was an assumption that race was fixed in my biology, DNA strands woven through centuries of evolution.

Race is not biology

These biological understandings of race have been buried in the American conscience since the early 1920s. American eugenicists tried to portray race with a sense of clear-cut scientific authority that often had far-reaching political consequences. From Cold Spring Harbor Laboratory’s Eugenics Record Office to the generous funding of eugenics research by the Rockefeller Foundation and Andrew Carnegie, several American institutions converged in the 1920s amidst American anxieties about increasing immigration from Southern and Eastern Europe. Their detailed racial hierarchies and pseudoscientific evidence underwrote restrictive immigration legislation and sterilization laws across the country, as well as inspiring Nazi scientists abroad.

Race is often portrayed as a genetic tree, with branching racial groups (left). In reality, the majority of variation exists within groups rather than between groups (right).

Despite popular support, extensive funding, and years of dedicated searching, scientists were never able to find a genetic or biological marker for race. Rather than a genetic family tree with distinct racial branches, human genetics looks more like a trellis, a long history of human migration and mixing making divisions porous and difficult to identify. When scientists define race for other species they often use the guideline, “a group whose members are genetically much more similar to each other than they are to other groups.” For humans, the opposite is true: we have much more genetic diversity within groups than between groups [1]. To put it another way, we are all much more similar than we are different. 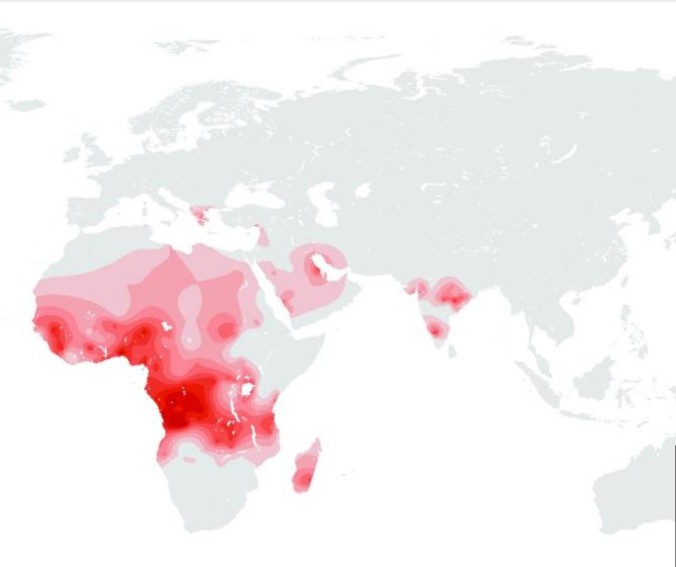 Differences that do exist reflect geographically based environmental adaptations rather than objective classifications grounded in national borders. For example, differences in melanin, which is the primary determinant of skin color and protects the body from UV radiation, is correlated with the amount of sunlight a population is exposed to. These genetic differences manifest in a gradient where people originating closer to the equator produce more melanin and people farther away from the equator produce less. Other genetic variants – like sickle cell anemia, a blood disorder that increases resistance to malaria  – cluster geographically based on environmental pressures. However, correlating these genes with racial groups becomes an exercise in probabilistic statistics. So while having the gene for sickle cell anemia may suggest a personal origin in sub-Saharan Africa, it is also possible that your genetic origins are from other areas stricken by malaria, like the Indian subcontinent or along the Mediterranean.

It is this arbitrary system of race that groups people from as far flung places as Egypt and Ireland together in one category and Pakistan and the Philippines in another, and declares that these groupings are both real and meaningful [2]. Given the absence of quantifiable genetic boundaries, it is clear that our constructions of race are made based on political choices rather than biological difference.

The political nature of race is evidenced in the shifting legal definitions of whiteness and blackness that have occurred over the course of American history. In the Jim Crow South, several states instituted a ‘one drop rule’ in which anyone with a single ancestor from Africa was considered Black. In other states one had to be 1/8th Black to be classified as legally Black. This meant that changing your race could be as simple as crossing a state border!

People who fell outside the black-white binary struggled with the moving target of whiteness – whose definition took on a pornography-style “I know it when I see it” framework. In the 1922 Supreme Court Case Ozawa v. United States, Takao Ozawa argued for his right to naturalization under the claim that he was White given that his skin was as white, or whiter than the average Caucasian’s, and that as an English speaking Christian working for an American company, he was a “true American.” The Supreme Court unanimously ruled against Ozawa, declaring that White was synonymous with “what is properly known as the Caucasian race,” a classification that Japanese did not fall under.

A year later, Bhagat Singh Thind petitioned for US citizenship arguing that as the descendant of Aryan people, he was a member of the Caucasian race. His suit cited several scientific authorities that had classified Aryans as Caucasians. The Supreme Court shot down Thind’s scientific arguments explaining that ‘free white person’ was synonymous with the word ‘Caucasian’ only as it was commonly understood, and that the language of the law were “words of common speech and not of scientific origin.” Scientific justifications were dispensed only when convenient, but the true authorities on racial boundaries always rested with those atop the racial hierarchy.

Legislation is not only responsible for the creation and maintenance of racial categories, but also the social meanings that are attached to them. When the Immigration Act of 1965 was enacted, it opened up immigration to people of Asian origin for the first time since the Chinese Exclusion Act in 1882. Because this coincided with the Cold War and the Space Race, immigration was opened to those who satisfied the labor needs of the time: doctors, engineers, and scientists. Far from being representative of the communities they came from, these immigrants were often wealthier and more highly educated than their peers back home. The resulting ‘Brain Drain’ paved the way for the model minority myth, plaguing children and their career aspirations for decades to come.

But to say that race is socially constructed does not mean that it does not have biological consequences. Race — as a major organizing principle for our social, political, and physical lives — creates disparate communities, affecting where we live, the schools we go to, and the kind of healthcare we receive. Given these separate and unequal environments, it is not surprising that racial health disparities proliferate. From heart disease and diabetes to cancer and hypertension, Black, Latinx, and indigenous folks consistently fare worse than their White counterparts.

To take a closer look at how these social inequalities translate to health outcomes, let’s take the example of asthma. Asthma prevalence in the US is highest in Black children, who are 1.6 times more likely to have asthma and three times more likely to die from asthma-related incidents than White children [3]. While a number of genes have been identified that may make children more or less susceptible, many of these genetic factors depend on exposure to ambient air pollution. Asthma prevalence is correlated to several environmental toxins associated with living near factories, high-traffic areas, and substandard housing [4]. And low-income people of color are more likely to live in more highly polluted areas as a result of the racist legacy of redlining, or the continuing practice of denying loans and mortgage to people based on (perceived) ethnicity.

To suggest that these differences are caused by genetics alone assumes that White people just happen to be ‘winning the genetic lottery’: scientific racism repackaged for the 21st century. Rather than our bodies being internally racialized by our DNA, they are externally racialized by the disparate environments we live in and the racist social policies that maintain segregation.

Race is still not biology!

Although we might assume that the race as biology myth is as good as dead, scientists continue to assert that race is a meaningful proxy for all things genetic. Companies market genetic tests to people who are looking to “uncover their ethnic mix”. Anthropologists claim that they can identify a person’s race based on skeletal measurements. The Food and Drug Administration (FDA) approved BiDil, the the first race-specific medication, in 2005. And so race as biological truth rises from the academic graveyard once again, a pernicious zombie idea that continues to haunt our scientific landscape. 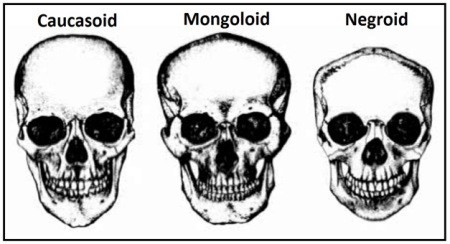 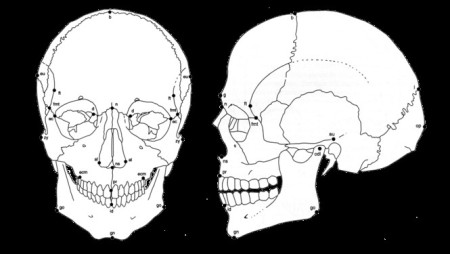 Comparison of cranial measurements done in 1920s (Top) and skeletal measurements used for anthropological research using FORDISC, that is used to identify the races of skeletal remains housed at the Smithsonian (bottom).

On a broader political scale, these biological justifications act as convenient distractions from addressing the structural factors we already know contribute to disease: poverty, lack of access to healthcare and education, social and political inequality. We pour billions of dollars into the medical industrial complex trying to identify genetic variants instead of building access to breathable air, drinkable water, and sustainable livelihoods. By pinning the burden of the problem on biology rather than society, we both attribute the effects of racist institutions on the bodies of the marginalized and obviate responsibility to change them. We claim that race puts people ‘at risk’ for these diseases rather than society putting them at risk through our systematic disregard for their health. We blame the marginalized for their own oppression.

Hopefully in another 90 years we will have vanquished the race as biology myth, along with the stereotypes, discrimination, and structural inequality that follow from it. People will feel free to imagine themselves and their futures outside of government-designed census boxes. And when we think back on the science of this time we will shake our heads with the same disappointment and disdain as we do of the eugenicists of the 1920s.

“Oh, how misguided we once were.”

[1] In the blood: the myth and reality of genetic markers of identity
[2] Overview of Race and Hispanic Origin 2010
[3] Asthma and African Americans
[4] Childhood Incident Asthma and Traffic-Related Air Pollution at Home and School

Alexis Takahashi (aka ATAK) is a multiracial organizer who loves plants, sushi, and disrupting capitalism. Her personal superpowers are cat whispering and laying in trees.

Your Science History is Whitewashed