Your Science History is Whitewashed

The history they didn’t teach you in school.

From left to right: The Chinese Silk Atlas of Comets, fractal patterns on a Fulani wedding blanket, panels from the Mayan Preface of the Venus Table of the Dresden Codex.

As students of color in the American public school system, we learn about countless dead white European men (‘dwems’ as one of our history teachers called them), and about few, if any, historical figures that look like ourselves. The history of science and mathematics is no different. While most of us are familiar with Galileo, Pythagoras, or Isaac Newton, we remain ignorant of the rich and varied traditions of knowledge production that were happening all over the world. These cultures had, and continue to have, significant contributions to human advancement that are often erased by contemporary Western historians. Here are 6 non-Western scientific achievements that were probably missing from your history textbooks:

Chinese astronomy has a long and prolific history, but is often forgotten by scientific history, as it originated and developed independently of Western astronomy. Chinese astronomers observed and kept extensive records of phenomena such as comets, sunspots, supernovas, and meteor showers. They used their knowledge of the stars to tell time during the year and predict astronomical events such as eclipses. Chinese astronomers also built various instruments to carry out these observations including armillary spheres, astronomical clocks, and planetariums.

Did you know that the term ‘algebra’ comes from the Arabic, ‘Al-Jabr’ meaning, ‘reunion of broken parts’? Muhammad stated that the pursuit of knowledge was a duty to every Muslim. As a result, a Golden Age of Islamic findings in science and math occured from the 8th to 15th century. Muhammad Ibn Musa Al-Khwarizmi developed a book named Hisab Al-Jabr wal Mugabalah (Book of Calculations, Restoration and Reduction) and emphasized that the book’s purpose was to aid in social practices such as trade or dividing up land. From the title Al-Jabr, the name of Algebra was derived. Other key contributions from this time include the decimal system, basic operations, trigonometry, calculus, arithmetic, geometry, and more.

The Arabic numeral system (labeled European above) is a reminder of the Middle Eastern contributions to mathematics and science.

Nowadays, the number zero is a given in mathematics and science, but this was not always the case. By 500 BCE, Chinese mathematicians had been using a blank space to mean “zero” for several hundred years, but using an empty circle to represent ‘zero’ originated in India. In 458 CE, Indian mathematicians used zero as a placeholder in addition and multiplication. The English word “zero” comes from the Sanskrit word meaning “nothing.” Zero was also invented independently by the Babylonians and Mayans (although some researchers say the Indian number system was influenced by the Babylonians).

An engraving of in open circle to represent zero in the Chaturbhuj Temple in Madhya Pradesh, India.

Polynesian nations voyaged along the Pacific far prior to their ‘discovery’ by European invaders. Modern navigation is often credited to ancient Greeks who navigated the Mediterranean and European nations during their age of conquest. Rarely highlighted, however, are Polynesians skilled in the science of navigation. They use astute observation to sail from island to island. This includes navigating by stars, landmarks, planets, the sun, the moon, and seamarks. They were also experts at holding course by reading ocean swells and wind.

A star compass that is used to navigate based on its orientation relative to certain stars rising on the horizon.

Fractals, in Western mathematics, can be described as patterns that repeat themselves in different sizes. They are used in a wide range of topics from describing patterns in nature to image file compression. Before their rise in the West, several African cultures utilized and emphasized fractals in their architecture, art, and belief systems. When they were introduced to Western colonial powers, they were often dismissed as inelegant or unorganized.

Mayan astronomers were thorough and accurate in their study of the stars in service of their religious practices. Some Mayans revered the planet Venus and carefully  recorded  its path through the sky in the Dresden Codex Venus Table to plan for religious rituals. Using this “Venus Calendar”, they were able to calculate the cycle of the Venus transit, which happens every 583.92 days. Mayan astronomers were also able to chart the movement of the moon and Sun and draw numbers more accurate than Greek Astronomer Ptolemy’s, whose work shaped astronomy until the European Scientific Revolution in the 17th century. However, Mayan astronomers go unnamed because the Spanish conquistadors destroyed their work. The conquistadors deemed Mayan science as lesser due to its ties to a religion they regarded as primitive and violent. 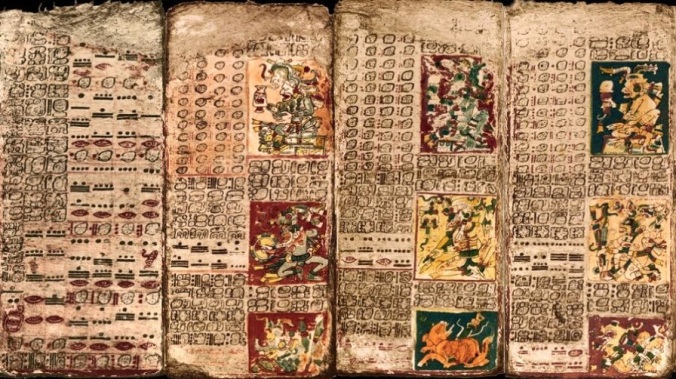 The Preface of the Venus Table of the Dresden Codex, first panel on left, and the first three pages of the Table. Image courtesy of University of California – Santa Barbara

Hood Biologist Explains How to Decolonize All The Science

Femmes of STEM Podcast Shares Stories of Women in Science