Memoirs of a Grant Writer: Uncovering the Military-Academic-Industrial Complex

What is the military-academic-industrial complex and how does it affect our science and our politics? Find out as we explore the inner workings of the Ivory Tower and its militarized past.

Three ‘golden triangles’ are shown overlaid with images of money, a war tank, and a graduation cap respectively. Together, these represent the ‘golden triangle’ of the military-academic-industrial complex. Artwork by Alexa Fishman .

When I started working as a grant writer at a university, my perceptions of academia as a sanctuary for curiosity-driven research and free-wielding intellectual exploration were quickly shattered. In my new job in the Office of Research, I found myself in the cutthroat underbelly of the Ivory Tower, embroiled in petty fights between faculty over grant dollars and dissecting solicitations put out by the Department of Defense. I had unwittingly become a worker of the military-academic-industrial complex.

Federal funding is by its nature unglamorous and technical and therefore doesn’t lend itself to flashy news stories or casual dinner conversation. For this reason, most people outside of academia are not aware of the kind of influence federal agencies have over the trajectory of science. Even as someone who considered pursuing a PhD, I was completely oblivious to the how much power these institutions would have had over me and my career.

Each federal agency has a distinct mandate set out for them by the White House, and they fund research both internally through national laboratories and by contracting out research to universities. For example, the mission of the National Institute of Health (NIH) is to investigate human disease and facilitate new treatments and cures. By contrast, the Department of Defense (DOD) funds research that will support combat operations and mass surveillance that are connected to broader agendas of national security and imperialism. Each agency decides internally their funding priorities, and then issues a funding announcement to solicit and compete proposals from around the country.

These funding decisions affect every level of academia, from the individual scientist to entire academic disciplines. Aside from money being a financial prerequisite for carrying out research, receiving federal funds also elevates one’s reputation – or social capital. Scientists’ academic reputation, tenure prospects, or even continued employment can hinge on whether their grants get funded or not. Universities strategize about how to court federal funding dollars, which serve as a major metric for school rankings, sometimes even developing entire academic programs around catering to a specific agency’s needs. The downstream effects of this incentive structure is that areas of science that are well funded become more visible, more lucrative, and inevitably more thoroughly researched than areas that are not. Areas that do not fit in with some broader national agenda are assigned second-tier status or go unstudied. It is for these reasons we know so much more about particle physics than paleontology, and why we hold greater esteem for engineers than we do botanists. 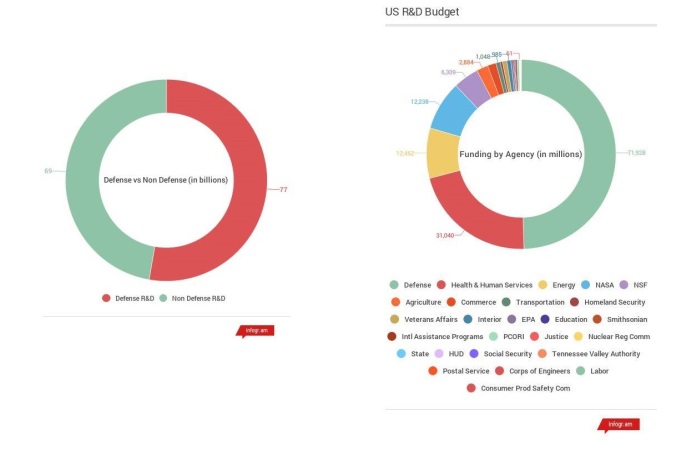 Click here for an interactive version of the charts

Given that defense-related research makes up over half of current research expenditures, military interests still dominate much of university research resulting in the‘golden triangle’ of the military-academic-industrial complex. In this arrangement, federal agencies fund university scientists to conduct basic and applied research that lays the groundwork for technology that is commercialized by defense contractors, and then sold back to the Pentagon for a comfortable profit. For example, for decades the DOD has funded research on networked sensing systems, radar, and control systems. All this basic research, which is then refined by private industry to produce new weapons systems, such as unmanned aerial vehicles (UAV), better known as drones. These drones, which have become a multi billion dollar industry, spur universities and industry to increase their research in areas relevant to drone development as they all clamor for their piece of the Pentagon pie.

From the beginning, the history of the military-academic-industrial complex has been connected to amassing military, economic, and political power. The Manhattan Project, which was dedicated to building the first nuclear weapon during World War II, was the first major investment of the Department of Defense in science. At its peak, the Manhattan Project employed over 130,000 people and cost the equivalent of $26 billion. Many prestigious universities were able to rise the ranks through war time contracts for weapons development. MIT, which conducted research on nuclear weapons for the Atomic Energy Commission, emerged from the war with a staff twice as a large, a budget four times as large, and a research budget ten times as large. Immediately after the war, the DOD was the only institution willing and able to support university research, knowing that scientists would be central to develop the technologies for the wars of the future. This investment they periodically get to cash in on – as with the Space Race during the Cold War and ‘Star Wars’ of the 1980s.

Scientists funded under defense-related programs might not advocate for the military applications of their research, but are motivated to overlook or rationalize them. Many faculty I work with often express a general disinterest in the applications of their research viewing the funding agency as a means for them to pursue their interests. Others perceive the pursuit of knowledge as an inherent good, and not do not feel culpable for any negative ramifications that may stem from their work. Dr. J. Robert Oppenheimer, who led the Manhattan Project, echoed these sentiments in a speech to Los Alamos scientists after the bombing of Hiroshima and Nagasaki:

This type of thinking is problematic because it circumvents the role that scientists play in the escalation of the arms race and the way scientist’s enable the government’s broader agenda of nation building and global domination. The continued silence and compliance surrounding these issues is further evidence of the degree of control that the military-academic-industrial complex asserts over scientists. Scientists and students need to be aware of the historical and economic context they operate in, and empowered with tools to navigate the funding landscape and think through the ethical implications of their work.

Knowledge is power. As scientists, who do we choose to produce knowledge / power for? Will that knowledge be used to maintain American military superiority or to actively resist current power structures? For those who have the privilege of being highly educated and able to participate in the the elite institution of academia, will we pursue research topics that best benefit our careers and personal interests or think critically about the impact that our work has and challenge ourselves to leverage our knowledge and access as tools of resistance?

Alexis Takahashi (aka ATAK) is a multiracial organizer who loves plants, sushi, and disrupting capitalism. Her personal superpowers are cat whispering and laying in trees.

The Case Against Techno-Optimism